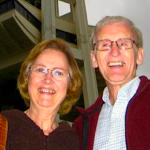 Don was born and raised in Washington state. It was at a small rural church at Preston, Washington where he first heard of Jesus, trusted him as his savior, and heard the call to missions.

JoAnn and he went to Japan as church-planting missionaries in 1969. Their first child was two years old at that time, and the other two were born and raised there. Most of their ministry was in helping to start new churches in the Kanto area, but they also did inter-denominational ministries, like serve as English editor of the Operation Japan Prayer project.

In 2004 they returned to Preston to take care of Don’s mother and to work full-time with Reaching Japanese for Christ. In September 2013 his mother entered heaven, and now ministry again takes a new twist for the Wrights.

He served as the director of RJC until 2014. He directs the RJC Academy, and with expert help functions as the website servant.