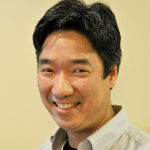 Richard was born and raised in Seattle, Washington as a fourth generation Japanese-American Buddhist. In 1979 he became a Christian at the age of 19. The change brought about a shifting of priorities which led him to become a missionary to Japan from 1989-2011. He is married to Keri and they now have 5 children, ages 6-19, living in Bellevue, Washington. Richard’s continues to minister to the Japanese with SEND International.