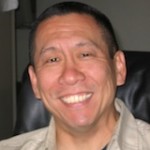 Rev. Dr. Rick Chuman is the Executive Director of JEMS (Japanese Evangelical Missionary Society). Prior to JEMS, Rev. Rick served 20 years as a pastor in the OMS Holiness Church of North America. He earned his BA in Linguistics from SDSU, a M.Div. in OT languages from Bethel Seminary West and a D.Min. in Marriage and Family Ministries from the Talbot School of Theology.

Rick is married to Kathy (15 years) and has two great kids, Timothy (10) and Kaylie (9). He is a Navy brat who lived in Japan (Yokosuka) for four years during his early childhood. A visit to Japan in the summer of 2008 rekindled his love and burden for the people of Japan and as a result, in September of 2009 he assumed the position of JEMS Executive Director